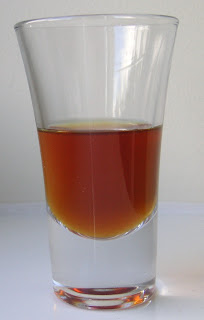 When one is friends with a baking luminary such as The Caked Crusader you cannot fail to have some of that cake passion (aka obsession) rub off on you.

Mr Portions told me I was insane for devising a carrot cake liqueur and still makes a ‘puke’ face every time I mention it…but I am nothing if not persistent; I even managed to get him to grate the carrots!

I took the flavours of a carrot cake e.g. carrot, cinnamon, and walnut but also added sultanas for some natural sweetness. The biggest decision was whether to use vodka or rum; while I suspect vodka would have given the purest flavour I thought rum far better suited the warm and spicy flavours. Plus, if I was making a carrot cake I would far rather it contained rum than vodka.

As I type this I am laid low with a heavy cold – this liqueur is soothing my throat better than any medicine. It’s sweet but with a strong kick of alcohol and, even with my dulled senses, I can pick out the sultanas and spice.

Would it be too incestuous to make a carrot cake and include this liqueur in it? Or how about serving it neat, with a cream cheese frosting float?

Here’s what you need:

NB. If you don’t wish to use overproof rum, simply replace it with extra golden rum.

Place the carrots, walnuts, cinnamon, sultanas and rum in a kilner jar and leave for 2 weeks, ideally somewhere cool and out of direct sun. Here are the dry ingredients in the jar: 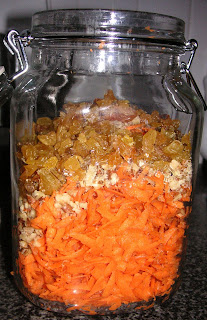 Here they are after we added the rum. It is acceptable, at this point, to feel vaguely repulsed and doubtful that this enterprise will turn out well: 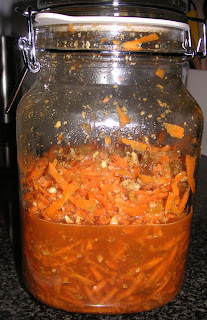 When the 2 weeks have passed, strain the mix and mash the carrot and sultanas so as to get all the juice and flavour from them. 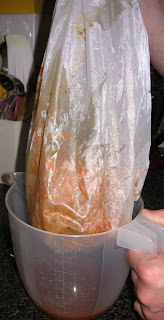 Do this several times until the liquid is free of any pulp. You end up with something that looks like greasy tomato soup: 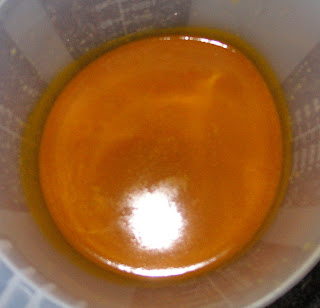 I think the contents of the straining bag look like a brain. Stop me if I’m making this all sound too attractive! 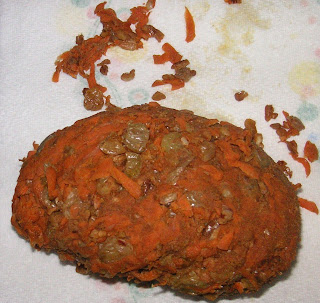 We started with the straining bag to remove the major pulp, then we lined the sieve with a butter muslin before moving on to a coffee filter. This took hours (I’m not exaggerating – we had to split it over two evenings) and got clogged many times but filtered the liquid very effectively. This was the point when I started to think, “maybe this won’t end up being poured down the sink.” 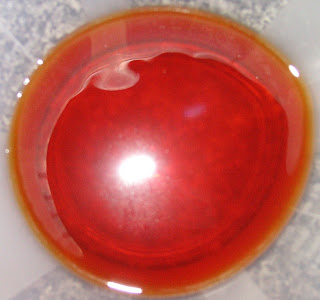 Add the sugar syrup and leave to mature for a month:

Time to make, from start to potable: 6 weeks

This one looks interesting I particularly like carrott "cake" so will have to give this a go. Hadn't thought about adding sultanas and walnuts. Interesting.

Look foward to more of your concoctions

Interesting and love how you followed through with the idea. With those flavors it should work.

...to our little site showing you how to make delightful potables in your own home.

What is a potable, I hear you ask? It's something that you can drink.

Over the weeks, months and years to come I, along with my beloved Mr Portions, will share with you our favourite recipes for home made liqueurs and other potables. You'll be amazed at what you can achieve with fruit, vodka and some kilner jars!